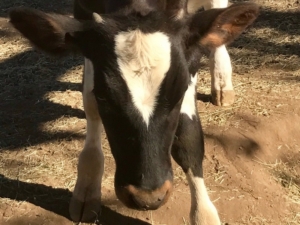 Lilly was blind at birth and came from the Lakeside Dairy. The dairy could not keep her and instead of being sold for meat, she was bought by the retreat to have a great life in a pasture. She is amazing in her spatial awareness, moves freely around in the pasture, avoiding obstacles, you would never know she was blind. You’ll recognize Lilly by the big heart-shaped marking on her forehead.

The Holstein cows originated in Europe. The major historical development of this breed occurred in the Netherlands. American farmers turned to Holland for the seed stock of dairy breeders around 1852 importing about 9000 cows in a ten year period. Holsteins are most quickly recognized by their distinctive color markings and outstanding milk production. Holsteins are large, stylish animals with color patterns of black and white or red and white. A healthy Holstein calf weighs 90 pounds or more at birth. A mature Holstein cow weighs about 1500 pounds and stand 58 inches tall at the shoulder. Holstein heifers can be bred at 15 months of age, when they weigh about 800 pounds. It is desirable to have Holstein females calve for the first time between 24 and 27 months of age. Holstein gestation is approximately nine months. While some cows may live considerably longer 12 to 16 years, the normal productive life of a Holstein is six years.

The Jersey breed originated on the Island of Jersey, a small British island in the English Channel off the coast of France. The Jersey is one of the oldest dairy breeds, having been reported by authorities as being purebred for nearly six centuries. They are more tolerant of heat than the larger breeds. With an average weight of 900 pounds, the Jersey produces more pounds of milk per pound of body weight than any other breed.