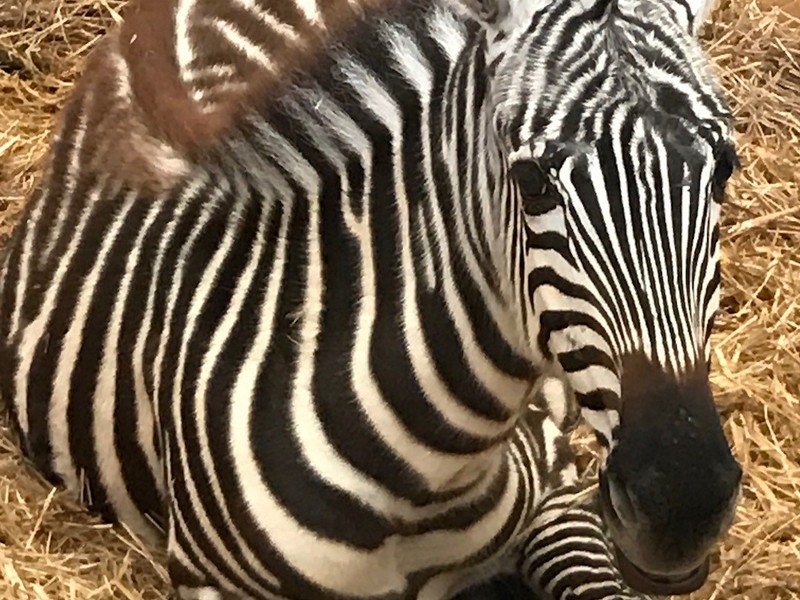 Hope came to us from Texas.  We went to pick her up and found her suffering from 2nd degree chemical burns to her face.  Injuries she suffered before she reached two weeks old.  She stayed inside her padded stall for 7 months to heal. She went for daily walks and for several months met through the fence, Bamboo our other zebra.  She was bottled fed until she reached 13 months.  At that time, she was introduced to Bamboo in the Africa enclosure.  They have not left each other since that day.

Zebras originated in Africa.  There are three breeds, the most familiar is the Plains or Grant (black and white), the Grevy’s (more donkey like with thinner stripes often brown) and Mountain zebras (featuring a fishbone stripes pattern on their rump and a flap of loose skin at the throat).  The last two are endangered. Moms wean their young at 12 to 18 months and babies become independent between the age of 1 and 3. Zebra skin is dark. They live in herds with one stallion and a harem of females. They can create a super herd of several stallions and females of 300 individuals. They also have bachelors’ herds of timid, young and old males. The zebra sees in full color.