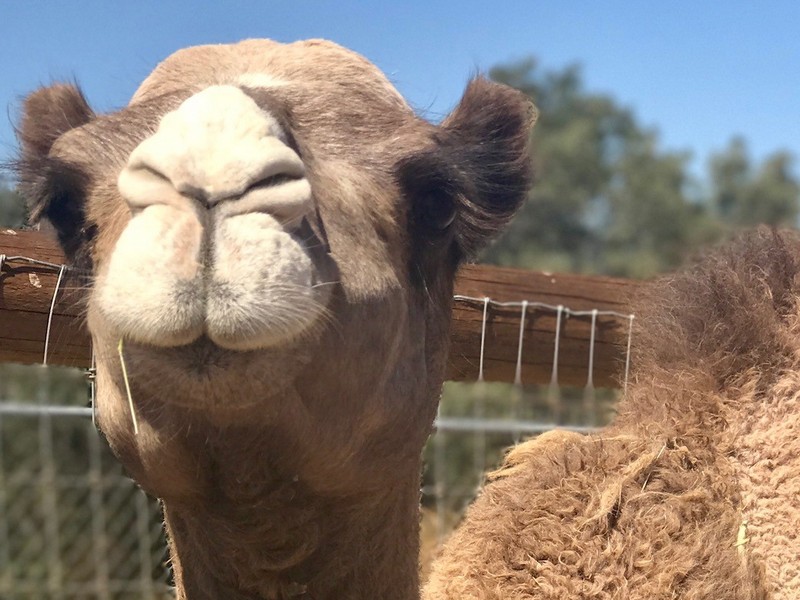 How he came to call the Retreat home:

He came from Florida. His previous owner realized he was related to one of her camels and didn’t want him as she wanted him for breeding purposes. So, he came to live with us… and from the get-go it was love at first sight between Cairo and Banfora. In fact, it was Cairo who lured the other camels from the barn to their new pasture.

A camel is an even-toed ungulate within the genus Camelus, bearing distinctive fatty deposits known as “humps” on its back. Cairo is a one-humped or dromedary camel which originate from the desert of the Middle East and the Horn of Africa. The dromedary camels have been domesticated; they provide milk, meat, hair for textiles or goods such as felted pouches, and are working animals with tasks ranging from human transport to bearing loads. A full-grown adult camel stands 6 ft 1 in at the shoulder and 7 ft 1 in at the hump. Camels can run at up to 40 mph in short bursts and sustain speeds of up to 25 mph. Camels do not directly store water in their humps as was once commonly believed. The humps are reservoirs of fatty tissue: concentrating body fat in their humps minimizes the insulating effect fat would have if distributed over the rest of their bodies, helping camels survive in hot climates. The average life expectancy of a camel is 40 to 50 years.